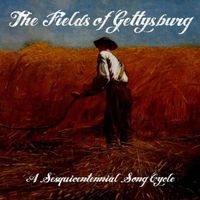 From the recordings Sacrificial Lambs and The Fields of Gettysburg

Sacrificial Lambs is an instrumental serving as the transitional passage from the Longstreet's premonition as the epic unfolds to the impact of war on the three young characters whose collective story dominates the latter half of the song cycle.
There are three movements in this piece:
1. Trouble Up Plum Run - the first movement symbolizes the soldiers preparing to face the day (July 2nd, 1863), forming up with their platoons, and moving out into position in order to do battle
2. Assault along Cemetery Ridge - this part signifies the onslaught of the fight. And, the fighting was fierce on July 2nd; from Culp's Hill at the north end of Cemetery Ridge to the Little Round Top at the south end. This section ends with a shot...the shot that ends the life of Wesley Culp on the eastern side of Rock Creek, near Culp's Hill
3. East of Rock Creek - for Wesley Culp, the chaos of July 2nd comes to an abrupt and tragic end. As he gives up the ghost, a strange and twisted peace envelopes his spirit
The players all do a tremendous job on this piece.  Drummer Ammed Solomon stands out infusing rhythmic visuals throughout. The listener can "see" the soldiers marching, the field drummers setting the pace of the advances, and the cannons recoiling as they bellow out their payload. Ammed is a fantastic musician and his skills shine on Sacrificial Lambs as he uses drum sticks like paint brushes.